Bureaucracy dominates here. Highest chairs – the Prez and the PM – are occupied by the ex-bureaucrats coming from their respective compartments in India.

Forget the ‘Pro-poor’ slogan election slogan now with time-lapse. Dr. Manmohan Singh in three years could not even make a dent on the ‘Babugiri’ – bureaucracy – that prevails in India. The farmers’ woes only accelerate with passing time, leading then now to suicides, which could not be foreseen by the grand infrastructure and expertise available to the great Indian democracy. Surely he must be well acquainted with how efficiently and effectively the ‘Babugiri’ works in his departments.

After all, ‘Pro-poor’ or any agenda, White paper or Red slogan, hinges on the bureaucrats; hinges need to be kept well oiled. Notice, how effectively and efficiently with foresight on profit the SEZs came in force! Even a child labourer, working in a roadside open cycle shop without a roof, will tell 'how the smoothly machinery can work with greasing'. Anybody’s guess!!

India’s space agency, the ISRO, has announced plans to put a person in
space by 2014 and to land an Indian on the Moon by 2020, four years ahead of
china. The agency will seek US$2.2 billion in state funding – treble its current
annual budget – for its manned flight programme, and many times more for the
Moon landing. The plans, unveiled to Prime Minister Manmohan Singh last month,
were endorsed by a cross-section of the scientific community at a consultative
meeting on 7 November in Bangalore. Formal government approval will be aught
before the end of the year, says ISRO chairman Gopalan Madhavan Nair (Nature,
Vol. 444, 16 Nov. 2006 p.255).

Indeed, how patriotic our scientists are! Our government can neither take care of the peasants nor nation’s boundaries, and they have ambitious plans where people don't figure; it’s no less than Bollywood sentimentalism. While China goes on claiming neighbouring lands, our scientists want to claim the Moon, though they not the first.
We should not be surprised if in near future the government policies go for the supply of ‘corn-bio-fuels’ to boost American-Bush-Fire, which might add to GDP but leave the peasants for slavery and starvation! 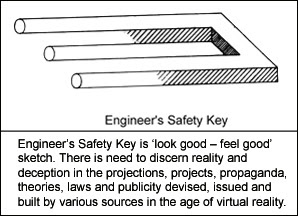 “Good intention remains abstract until worked out in deeds and products.” — Christopher Day, ‘Places of the Soul’
WE OF THE RULING MINORITY have been using ‘economy’, alike religion, to corrupt and exploit people. We have been capitalizing on the poverty of the Third World India, and convert the ‘wants’ of the First World India using the mantras of ‘economy’. Invariably in virtual economy we fail to convert money into needs in real life.

Now that the United Progressive Alliance has come to power at the center in India, the citizens must watch carefully how all the instruments – laws, policies, planning and finance bill/s – are made relevant to the notion of ‘pro-poor’ at the micro-level on the ground in the coming years.

Of course the people – one billion people – need to be taken in confidence, to participate and to be educated in the national interest about the instruments of development and governance that are already in force and the proposed ones, until next election. We take two instruments for example:

1. WATER IS CRUCIAL ISSUE. The proposed project of ‘Interlinking Rivers’, even if it must be scrapped, should be taken to the public forum to the notice of one billion people, alike the state and national elections. Government should take it out of the safe custody of the experts, planners, legislators and executers. Let it be debated in all its aspects, mainly its Environmental–Ecological–Energy cost, not merely financial cost, and how this instrument would – or would not – reach the poorest of the poor. Obviously the project finances should be translated in real deeds and products at micro level on ground; how the money will be disbursed and what fraction shall reach to the land and people in the forests, hills, deserts, plains and cities; and how much of it will be consumed as administration (bureaurocrisy)) cost?

2. THE INSTRUMENT OF MEDIA also could be used for the purpose of educating the people. Radio (Akashvani) and television (Door Darshan) should help the illiterate who very between 60 to 90 percent in different areas. We, however, are aware that these instruments are not accessible to many people where even basic needs are not met. Leave aside illiteracy; even malnutrition and starvation deaths are not unknown. The question is how these instruments shall reach the people. Reaching out to billion people means to make it relevant to them to establish its credibility. Needless to say when such projects as “Interlinking Rivers” are placed before the people for the information and scrutiny it must be made sure of the ‘language’ they understand. Certainly they understand the language of environment, ecology and energy in the way and where they live. What’s more, even the plants and animals do understand them. In this course, perhaps, the experts and the bureaucrats etc. need to educate themselves in the “People’s Language”. They should also bear in mind where the majority in India lies, that it is neither in the corridors of power nor in the stock exchanges, it is there in the 700 – 800 million peoples of India.
The likes of Kalam and Singh, and many others inside and outside the governments, irrespective of their brands, ideologies, colours and monopolies, faiths and the two examples of instruments mentioned above are made to order to see and perceive reality through telescope. However in the matters of land, water and people it is necessary to complement their vision with the view of the reality through microscope. It is of vital importance to make all the instruments accessible to the people beyond metropolitan cities and towns in the six lakhs villages across the country.

We wonder on this two-point agenda of ‘Interlinking Rivers’ and Media, as water and education are crucial issues, and when the people are adequately informed and educated, then who shall win the elections and where? Perhaps the corporate world with its vested interests in the projects would wholeheartedly vote in a large majority. And yet there may be a time when even the alliances may not work. Viva Democracy!

(This article was published by the Journal of Indian Institute of Architects, and by CBS Forum on its website online)
Remigius de Souza
(27-05-2004)
Posted by Remi de Souza: Unknown at 12:11 pm No comments: Links to this post

A tale of a scavenger in India

A tale of a scavenger in India

SCAVENGER’S WORK must have been one of the noblest vocations for ages in the civilized societies. We have heard Gandhiji used to spare some time to do sweeper’s work. Surely he must have added some valuable dimensions to his insight in the society while doing that. Scavengers know the secrets – the hidden life of the society that even the well-informed and well-meaning experts may not know or even imagine.

While working as an architect planner for city municipal council at Vadodara I learnt something about this vocation; it was an untaught lesson. In the office there were some boys of ‘Dhed’ – an untouchable caste, a lowest of the lowly castes. They used to prepare and serve tea and sometimes chewing tobacco and serve drinking water: a scandalous service to take from a Dhed in the caste-ridden Gujarati society. After I left the municipal job, and elderly person who was my subordinate then had courage to ask, “Sahib, what is your caste?” When I replied “I am Dhed”, he was not ready to believe. He said, “Your face doesn’t look like one.”

Now in the modern times, the scavenger’s job is done by machine. But we don’t know if the scavengers are redeemed from the curse of their caste, even if they were to be converted to other institutionalized religions. Once, four converted low-caste persons, which are called Dalits – the downtrodden, were murdered by guns in the open daylight at village Golana, Gujarat, on the Republic Day a decade and half ago by high caste Hindus, because they had refused to do any menial work work.

Once in a well-known school in Gujarat, the students had boycotted the class when they made out from his accent and language that the newly appointed teacher belonged to an untouchable caste.

We also do not know if the machine doing an efficient job of cleaning or polluting the social and physical environments. The scavengers and their work is disliked and hated but cannot be denied. But who would be blamed for the mischief of the machine?
On the occasion of my mother’s funeral I was in tears and some people consoled me. I didn’t tell them what brought me to tears. That I remembered her last wish was, not burry her among the dead of the untouchable castes, but take her body to the cemetery at our native village. We rarely remember that our final destiny takes us to the same destination, irrespective of our status – social or otherwise, whether we are consumed by the vultures, worms or flames.

Once when I was in the municipal service the boys said, ‘Sahib, we saw you yesterday at “Khanjaroo” (brothel)’. I didn’t reply that I was following a scavenger’s vocation, which was bestowed upon them by the great Indian tradition, to identify them by their caste, even though it would have been a respectful gesture. Among fishes there are some scavenger species; they also get a place in the aquariums. Well, the big fish eat the small fish is another matter.

I shall, sooner or later, write about the prostitution that I mentioned above.

My Earth begins here
From the soil below my feet
Wherever when I’m there.

Up ‘n up the vision ascending
Round ‘n round horizons holding
High ‘n high on Himalayas’ cliff.

Here, the ego of rumbling cliff – ocean
Dissolve – evaporate now and then
Vanish in the soil – in the air.

Enough is the warmth in heart
To embrace new horizons;
Expands my selfhood now and then.

Sound bond with the soil holds
Whole Earth in a quarter of a ‘roti’;
Recognition retained in a square foot

Soil below my feet.

* * *
(Translation from the original in Marathi by the author)

I take fantasy flights to the higher world of planets and to the lower world of bacteria in the virtual reality of print and electronic media, and return now and then to Mother Earth and ask her, “Give me a fistful grains of sanity for my survival”, thus says Remi.

* * *
(Translation from the original in Marathi by the author)

Note:
1. “Fistful of grain”: In my native village until fifty years ago there were no beggars. Only the mendicants, ascetics, sadhus came to the households asking for alms. They were offered at least a fistful of grains, no coins. There was not much of currency. Now there is minted and printed currency, and rich as well as poor beggars everywhere.
2. ‘Roti’: is Indian flat bread baked on burnt clay or iron plate, usually concave in shape.
~~~~~~
Remigius de Souza
Posted by Remi de Souza: Unknown at 10:49 am No comments: Links to this post

This work is licensed under a Creative Commons Attribution-NonCommercial-NoDerivs 2.5 India License.